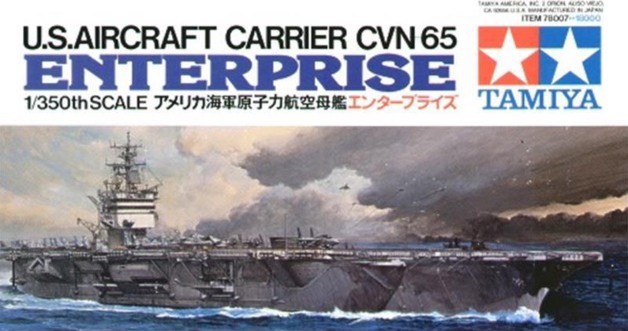 The United States Navy Aircraft Carrier CVN-65 Enterprise, also known as the “Big E”, is the worlds largest ship and the first nuclear powered aircraft carrier. Webster defines the word Enterprise as meaning"Under­taking, Project, A business organization, Initiative, etc.", and the CVN-65 fits all of these definitions perfectly.

The carrier Enterprise is the 8th U.S. Naval vessel to carry the name, and the first one was launched in 1755 as a one masted sailing ship that served during the American Revolution and its displacement was only about 1/1000 of the current namesake. Following the end of the second conflict, the U.S. Navy had on hand 99 aircraft carriers, with another 39 under construction, but with the completion of hostilities construction was halted and many of the others were mothballed. In 1947, only 20 carriers were in active service, including the Midway. With the advent of jet aircraft and heavier gross weights of the new planes, a large 60,000 ton class of carrier was discussed to cover these needs. Construction was begun on CVB-58 in 1949, a 65,000 ton class carrier, but was halted after only five days, because of a change in political thinking, wherein emphasis was placed upon tactical long range bombers instead.